In Spain, and on the Camino


In Paris
By the time we napped there wasnt much time left, so we got a picnic and wandered Square George Brassens. It had pony rides, a carousel, a rock climbing area, a herb garden, a wading pool and beach, a waterfall, and a flea market for books on Sunday, and all in about an acre.
Travelling to St Jean pied de Port on tuesday the 22nd
We had a great trip on the train through the french contryside.. Though we could only get an unreserved seat, we got fine ones. We wandered Bayonne for 2 hours, then a bus to St Jean and our albergue. We got info from the Pilgrims office, then dinnner. He kindly made me an omelet, as the meat was veal. No eating animals for me! Of course, when lights were out, the chorus began: snorers!
Up to Orrison´on Wed the 23rd
We had a lovely day for a very steep climb to Orrison. Slow and steady, with lots of breaks for water. The farms were beautiful, perched on steep slopes, and we saw lots of sheep and a few ponies. We arrived at 11 am, after a 3 hour climb, with no injuries.I did a lot of puffing on the way up. After a shower, laundry, and a brief nap we had lots of time to get to know the other 34 pilgrims staying there, while watching those hardy souls pushing past, all the way to Roncesvalles. I finished a book, wrote in my journal, and just vegetated. Dinner was at 6:30. and everyone introduced themselves. Dinner was vegetable soup, roast pork, white beans in a tomato sauce and basque cake (I got fruit salad). Lights were out in our room by 9 pm.
Up and over to Roncesvalles on thursday
We left 7:50, and it was a gruelling day. We encountered every kind of weather. First the sun shone, then clouds formed, drifting across the paths. We saw banks of snow, still unmelted. Then it became black, and it sprinkled. Then more sun, but as we descended to Roncesvalles, the clouds opened, and both Wendy and I fell,on the muddy path as we took the steep route down, but no injuries and the laundry is done and drying.
We saw many sheep, horse and cattle, wandering, as most of the pasture is unfenced.
The terrain is as varied as the weather; paved paths, stones, gravel, mud, rocks with a river running through, and mulch as we walked through the forests. The path was as steep as yesterday in places, and the descent was about 45¨´ the whole time. We climbed to 1440 m, so were above the clouds most of the time. The valleys were filled with mist
Monks have welcomed pilgrims here at the monastery since the early 12th century. Since I was here in 2007, they have updated the albergue, and there are cubicles with 2 bunks in each, and they expect 300 pilgrims today. They will do your laundry for 3 euros. I will go to dinner at 7 and mass at 8. I missed both last time, as I arrived at 8 pm then.
So we had a challenging and rewarding day today, and after a great sleep tonight, we will be ready for another great day tomorrow. 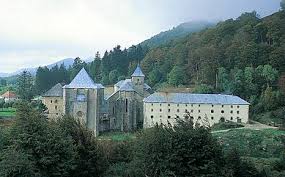 Buen Camino! ( the monastery in Roncesvalles)
Posted by Darlene at 7:31 AM