Friday April 25 from Roncesvalles to Larasoana
What an ambitious day this was! 26 km, and almost entirely either up or down. It rained almost all of the day, but there were some highlight.
First, the first real cafe con leche .. this is what I am talkin about!! So good. 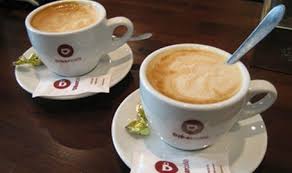 Back to the rain, which was intermittent, and made the path slippery. It was almost entirely paving ..cement, with stones of all sized embedded in it, and sometimes it was scored diagonally on the really steep parts.
We took the wrong track out or Burgette, by taking the  highway 135 instead of the Camino, but Brierly´s maps are good, and we recognized the trail when we encountered it a few kms on.The most steep and dangerous part was down to Zubiri. I didn´t fall this time, but Wendy did.
The rain eventually stopped, and after our lunch break at 3 pm in Zubiri, we decided to go on. I was talking with a guy from San Francisco, so the time went quickly. We stayed in the munucipal albergue in Laransoana. It is very basic- plastic sheets, simple showers with lukewarm water, but only 4 in a room.
Dinner was different - there is only one bar in town doing dinner, and we couldn´t get into the 7 pm sitting, so I went looking and found Casa Elita - she does home cooking. She is Italian, and a real spitfire. She chastized Wendy for not finishing her risotto with liver, and when I asked her for a gluten free meal, she asked me if my other friends were same as me, or normal! Best of all, she had pictures of Martin Sheen and Emilio Esteves on the wall taken with her and her son. Some of the filming of the Way was done here, and her son is briefly in the movie. When Martin took off his backpack and it fell in the water, they used the bridge in this town.
There was a party in the town hall, which is in the same building as the albergue, fronting the town square, so the noise didn´t die down til quite late, so I didn´t get much sleep. But..

Saturday April 26, Larrasoana to Pamplona 15 km
Walked 4 km before breakfast, in the intermittent rain, all up and down. I am now looking forward to the Meseta! It felt gruelling again, but that was probably the lack of sleep. We arrived at the albergue at about 1 pm, so I have showered, done my laundry, and am now on the internet. There seems to be less computers, and most people have phone and use wifi, so the blogging will be random, but I love your comments, so keep them coming.
We are staying at Albergue Jesus and Maria. It is a former seminary, and was refurbished in 2011, so is quite nice. 2 bunks in semi-cubicles, and some of the characters we met in Orrison, Roncesvalles and Larrasoana are here, including Sharon,  from Toronto, who walked last year with Michelle, and a guy from the Czech Republic, who said his boots were his best friends, as he lovingly cleaned them last night.
Pamplona has been the capital of Navarra since the 9th century, and before that was a fortress town, founded by the Romansin 75 AD. The walls are amazing. Here is a picture.
Out for dinner later with a crowd, organized by Bob from San Francisco.
Buen Camino to you too 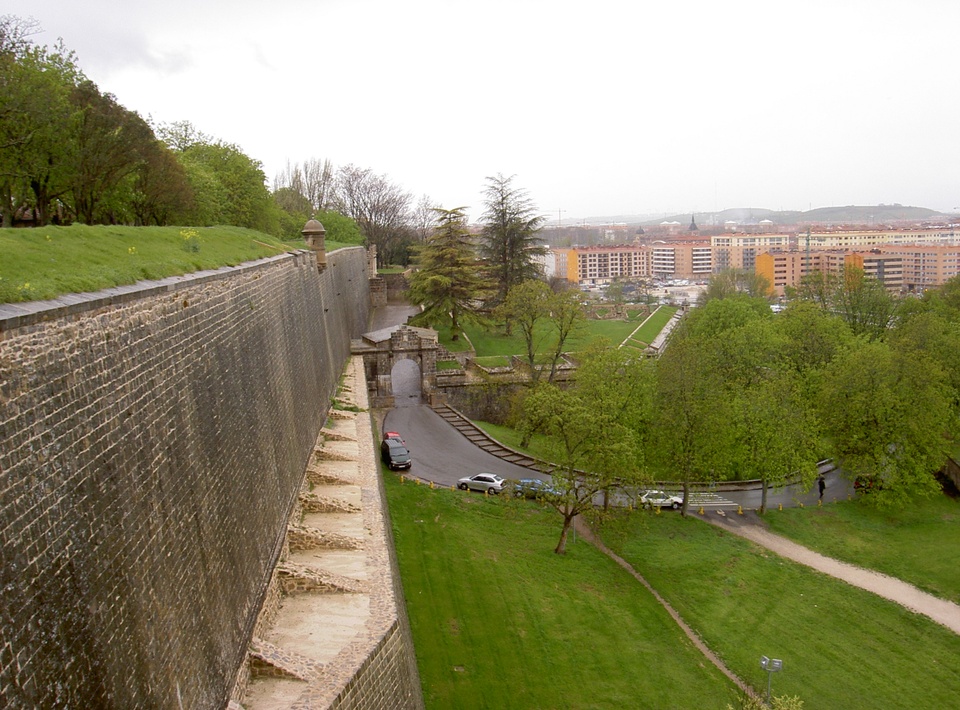