All went well with the trip to Switzerland.  I was worried about the weight allowance for carry-ons, so I weeded my backpack thoroughly, and then they never even weighed it at the airport. I had also put a lot of stuff in my pants pockets, so of course when I went through security, they made me empty them into a tray, and the security guard made a comment - looks like a supermercado (supermarket). I flew Easyjet, and you cannot book seats, so seating was a free for all. We also walked across the tarmack both times to get on and off the jet.

Josef met me at the airport, and the hotel was only one stop away on the subway. Up for breakfast - would you believe the hotel had no cereal without gluten, in the country that invented bircher meusli?
Lots of bread and pastries and cheese and cured meats, though.

We took a train along the side of Lake Geneva. It was a 2 hour ride through a beautiful countryside, and when we entered the canton of Wallis (Valois) the intensive farming was remarkable. The mountain sides are all terraced, with many of them growing grape vines. We had lunch at Brig, then caught a postal bus up the mountain to the Simplon pass - at 4000 meters above sea level. Wow - the vertigo was hard to control, but I kept telling myself that the bus drivers do this many times a day, and we don't hear about buses and cars falling off the  mountain. They truly are works of great engineering.

We are stayiing in Simplon-Dorf, down a few feet from the top. The weather is either misty - that is, in the midst of clouds, or raining, so we wandered around the town and visited a museum about the building of the Simplon Pass. Dinner was another challenge - no fish or chicken on the menu, and no vegetables either, but I ended up eating rosti with cheese and tomatoes, and it was truly delicious. And they are letting me use the office computer to write this, so I am grateful for their generosity.

Tomorrow we will get back on the bus for a 30 minute ride down the mountain ( I think) and into Italy for lunch at Domodoloroso, or something like that. Then the canton of Tessine, which is very Italian. On the train ride the announcements were always in German, but sometimes also in French, and or English. But English is a fourth or fifth language here, so the menus are not always translated into English, and neither were the captions in the museum. In Spain I could puzzle out the general meaning, but here I am lost with German.

Wish I were multilingual, instead of lingually handicapped. 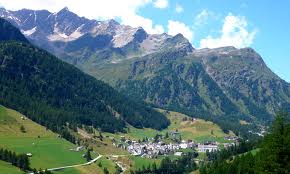 Darlene
Posted by Darlene at 12:26 PM

I walked from St Jean to Santiago in the spring of 2007.
I returned to the Camino in September 2012 as a Hospitalera at Refugio Gaucelmo, then I walked to Santiago starting October 1.
Switzerland was my next destination, then home to Toronto.
I walked from St Jean again, April-May 2104 with my neighbour, Wendy.
In August and September of 2016, I walked with my daughter and grandson from Astorga to Santiago, walked the Camino Ingles alone, then volunteered once again at Refugio Gaucelmo.
Spring of 2018, I plan to walk the Portuguese Camino, then stay on for more, as yet undetermined, adventures.