Albergues on the Camino

The bare facts; We left late, as Wendy was missing a bag - we never found it. But the day was about 18´and overcast, so we made great time. However, I never got my second cafe con leche. Most bars were closed.
We stopped to visit at the albergue in Granon after 5 km. I intend to volunteer again, and am checking out the place where that might be an option. So at 9;30, Christina, from Italy, was swabbing the floor alone, as her partner was already 2 days late in arriving. Last night she coordinated dinner for 50 pilgrims by herself! It was as charming as I remembered, and will go on my list.This is what dinner looks like with a smaller crowd. 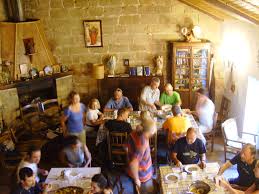 There are categories of albergues. There is the municipal.

Municipal
They are usually run by employees, paid for a few hours a day. The one in Larrasoana was our least favourite. Estella was better, but both were very close quarters, with beds close together.
Los Arcos seemed to be a municipal, but it was run by the Amigos and staffed with Belgian volunteers. Najera was also staffed with volunteers. They were Spanish this time, though Mike has worked there, so they get a variety of nationalities.

Private
We have stayed in several of these. Though they need to make a profit, they usually charge only 10€ or so. Today we are in a private in Belorado, paying only 6 for the bed. We both have uppers. He apologized, as they like the young people to sleep on top.
The private albergues in St Jean and Orrison were much more expensive - not as much competition for them or choice for us. Still the bunks and crowded rooms.
We stayed in 2 called Apostle Santiago. The one in Puenta La Reina was exceptional, except for the steep climb.

Charities
Roncesvailles was run by the church and staffed with volunteers from Holland. This was a favourite, as there were 2 bunks per cubicles. The bathrooms were beautiful and clean.
Pamploma was a charity, sort of, staffed by people with disablilities. It was almost as great as Roncesvalles, though there was less privacy.
Last night in Santa Domingo we stayed in one run by volunteers - spanish again. It too was bright and clean.

About half the time the showers and toilets are shared with men and women. The shower cubicles can be very tight, as are the toilets.

But a pilgrim is grateful for a clean bed and a shower, and laundry facilities.

There are also more expensive options, but we are chosing the less espensive places, and we are usually happy.

We went to mass last night at this church in Santo Domingo.

Darlene
Posted by Darlene at 7:51 AM